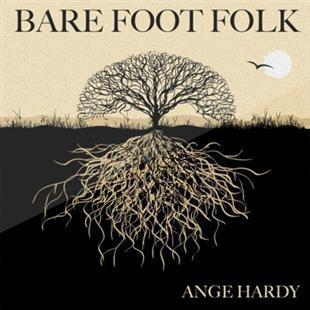 Ange Hardy is a storyteller. This is by far the main thing to take from her second studio album Bare Foot Folk. She uses her peaceful vocals and soothing guitar strumming to lift the spirits and get you swaying your head to match the soothing melody.

Each song on the 14 track album is originally written by Ange, which is quite surprising, in a good way. The songs themselves are arranged in such a way that they sound to all intents and purposes to actually be traditional ballads.

When you listen to the lyrics you get a powerful traditional feel that you’d normally get with old songs brought to light. With this album though they are all new adaptations and original songs, perhaps with traditional influences, but still original.

The songs are mostly inspired by traditional stories but have had all the elements Ange wanted taken out and told through her delicate harmonics. There is a nice mix of more modern ideas too, such as Crafty Father John which is inspired by a post seen on Facebook but that still holds a tale.

Ange’s sound itself is sweet, that is the only real word for it. Sweet as in pleasant to hear and leaves you wanting to have just one more. The album is all her work so the extra voice dubbing is a good addition as it gives her already strong voice an extra magical hold over the listeners.

Each song, musically, has a similar layout: Ange’s voice and a soft guitar background. But each song really goes into the individuality of its story and no two songs on the albums sounds like a repeat, the overall theme sound may be the same, but every song is its own distinct flavour.

As well as soft (and often sad) stories about lost ships and lost lovers there are also a few songs that seem to be much more heartfelt. Examples here would be Young Martha’s Well, My Old Man and The Ghost on the Moor’ which seem to all come from scenarios more relatable to modern times (indirectly).

A particularly interesting song on the album is an adapted sea shanty called The Storm Has Now Begun which uses a soft bodhrán drum rather than a guitar to give a slightly jollier beat (which, as is usually the way with folk, is much jollier than the actual lyrics).

Perhaps the standout from this collection would be Stop Your Crying Son. If you did not know that Ange was a proud mother already then you certainly would after hearing this song, only a mother could write such a warming lullaby. The poetry of the song mixed with the pacifying vocals makes this the crown jewel of the album.

This is an excellent follow up album and shows a true mothering nature of storytelling and should be enjoyed by everyone.