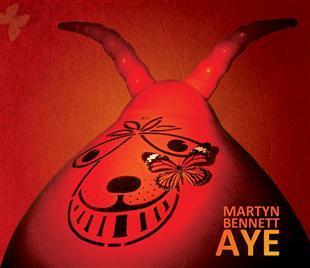 Martin Bennett’s album AYE is a ’best of’ release of both heard and unreleased tracks which come together to demonstrate his immense musical talent, cut short by his premature death at 33.

Born in the Gaelic area of Canada, and moving to Scotland, his Scottish roots are always clearly discernable. Bennett learnt the bagpipes at the age of ten, and showed immense musical promise. He moved on to study at Edinburgh City School of Music, and then the Royal Scottish Academy of Music and Drama, where he gained a working knowledge of musical composition and classical music.

Though the work he did at the Royal Scottish Academy was dramatically important to him, he found the classical world slightly too rigid for him, and instead returned to his folk and roots origins. From there he chose to merge folk with the increasingly popular genre of dance music, where he found he could combine his interests in composition with this new scene.

And that is where this album comes in. It provides a platform for his great achievements as a fusion composer, musician, and performer. His talent for both composition and instrumental work merge to create a body of work in which traditional Scottish forms and idioms are meticulously paired with modern electronic processing to create a sound which is still fresh.

The album works as a successive journey with driving beats and catchy motifs. In the slower moments, such as Sky Blue Remix, and Blackbird, the pace is paired with a reflective tone, and the effect is a build of up an ambience-like atmosphere of release. At the opposite end of the spectrum, Crackcorn, (one of the previously unreleased tracks) is a great example of Bennett’s ability to build up tension, and through the use of motif and heavy drum beats he recasts an American folk song, using heavy beats which are reminiscent of vengeful joy.

One of the album highlights is found on Liberation in which Bennett pairs monumental driving strings with dramatic beats and successfully fuses Middle-Eastern tones with Michael Marra’s religious spoken word. It succinctly demonstrates a strong amalgamation of themes which really work together. Swallowtail also emerges as a strong contender for best track on the album, as four separate Irish reels come together, build up, gain speed, demonstrate impressive musicality and create a real party atmosphere.

AYE is a cohesive musical journey which demonstrates Bennett’s impressive musicality, his capability in the mixing room and his virtuosic musical ability. The strength of the album is in the musical themes, motifs, and use of fiddles and pipes - which are layered with electronic textures to create precision engineered music. In doing so he successfully juxtaposed the old traditions with a new emerging musical market, and as a consequence he created a totally original sound.