Will Varley - As The Crow Flies 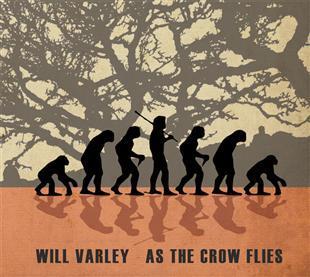 As The Crow Flies is the outstanding new album from Will Varley. Following on from Advert Soundtracks - his debut release in 2011 - Will continues to share with us his remarkable take on folk music along with fine musicianship and a real joy for songwriting and singing.

The album brings with it a very special ethos. As a novelist and filmmaker alongside his passion for composition, Will’s creativity and quest to take his music directly to the people is commendable. His 140-mile walking tour saw him sing to anybody willing to listen and as such means that he already has an impressively loyal and strong fan base - and rightly so.

On the album, Will is joined by a whole host of musicians and singers: Natasha Greenham (fiddle and saw), Nicola Vella (vocals), Billy Glinn (vocals), James Hatton (percussion), Phil Self (mandolin, bass vocals) and Aidan Shepherd (accordion). These additional layers of texture and sound complement Will’s use of guitar and vocals without ever distracting from the poignant messages and ideas he is eager to communicate.

Will’s wonderful and yet ’rough around the edges’ voice is so full of character that it effortlessly adds to each story. He is able to bring each song to life, turning them into real stories and holding the attention of the listener until the final word. As well as being a fine singer, I Got This E-mail sees Will explore the use of speech alongside song, making for a somewhat theatrical feel and adding to the humour.

Will has a natural way with words, culminating in songs with powerful and inspired lyrics. But not only are his lyrics and stories cleverly crafted, their relevance to modern day society puts a real contemporary spin on traditional music.

His witty views on modern day society, for example in I Got This E-mail, blend seamlessly with his more serious considerations of the 21st Century. Weddings and Wars and She’s Been Drinking are more scathing reactions to problems faced and can be somewhat sobering compared to the light-heartedness of previously mentioned tracks.

Will handles the serious and the humorous with equal honesty, emotion and energy. And with such interesting melodies and inventive rhythms the result is remarkable. As The Crow Flies: A truly fantastic album where lyrical gems, wit, and passion really does pack a punch.