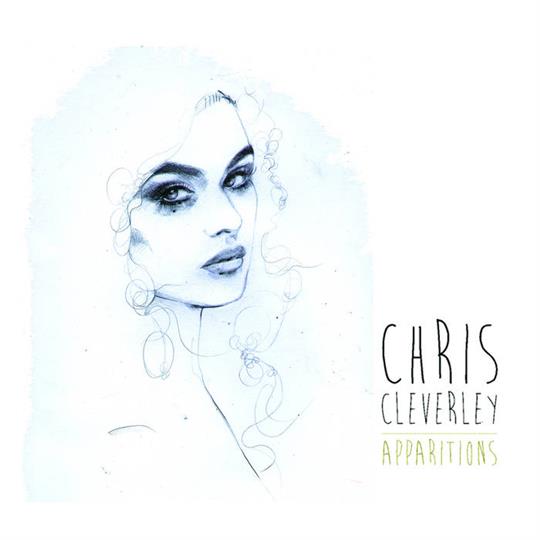 ’Well known in the Midlands.’ Sounds a bit like ’big in Barcelona’, but something which might soon change for Chris Cleverley. His fine debut Apparitions, is what he’s described as “an album as much about hauntings as it is about memory and the fine line that can separate the two.”

The album features contributions from Chris’ regular live band who’ve developed the songs into full arrangements in subtle accompaniments, yet it’s Chris who’s at the core. From the opening of the simple yet delightfully pastoral acoustic guitar piece Transience, through to the reflective thoughts in I’m Not Long For This World, the eleven songs are very much grounded in British and American folk traditions, his fingerstyle guitar shaped and influenced very much by the likes of the masters Martin Simpson and Nic Jones.

Chris has also talked about his fascination with harmonies, which are a particular feature of the vocal sound of the album, yet anyone expecting more from the big arrangements and dramatic crescendos he talks of may need to dig a little more deeply into the refined arrangements.

On the one hand, the pick of the tracks might be those which are more sparse and delicate and which seem to fit the theme of the album - Acetylene and the title track perfect examples of being tender yet intense. The Rafters on the other hand is perhaps the most up tempo, which sees the band developing the beautifully gentle opening more fully with strings backing a more urgent, some might say Mumford-influenced, guitar-led delivery.

A couple of traditional songs also get the Cleverley treatment. The instantly recognisable Oh Shenandoah gets a typically gentle retelling, while the lesser known I Wish I Was A Mole In The Ground is seen to in a pacey little bluegrass fashion, all banjo and a taste of harmonica.

Lyrically, Chris delves into areas which have quite heady and enigmatic, possibly cryptic, origins. “Timepieces of specific events that have reoccurred and manifested over centuries of human experiences in identical forms” may appear outwardly wordy and thought provoking. Yet, from touring with Martin Simpson and Sean Lakeman & Kathryn Roberts and with the 2014 Isambard Folk Award from Bristol Folk Festival behind him, the appearance of Apparitions provides another step on the path to bolstering his deserved reputation.