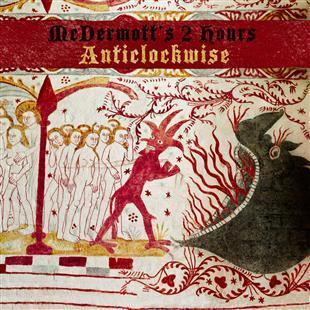 McDermott 2 Hours are quite a prestigious folk/punk band that many cite as inspirational, and it’s very easy to see why with strong accents and rock styles comparable to The Pogues and Dropkick Murphys.

We get a nice variety of styles during Anticlockwise which is released under the new On The Fiddle Records label. This good balance of sounds and styles is likely down to the decades of experience that this band has in their trade. The instrument layout of the band is standard percussion and guitars with a forefront fiddle adding the main Celtic elements and of course the vocals which sport strong accents.

Most of the songs are typical folk stories but set to more rockier music, particularly with songs like Fox on the Run and Darkness and Sail. There is a large spectrum in this album of Celtic and rock with some landing a lot further on the rock side, particularly All in Your Name.

Also on the spectrum there are faster more foot tapping songs like Song of a Brother, which act as breaks in the album. It gives extra spice to stop the music from sounding too similar.

There is great variety in the song World Turned Upside Down which is much more eerie sounding, and uses forefront and backing vocals in brilliant harmony to create a very chilling and mystical sounding song that gives you goose bumps.

There is a similar sound with Trickster which is much more folk focused along with Erin Farewell and A Fable from Aigge, both allowing the true Celtic roots to become the main focus of the track.

Anticlockwise contains a lot of variety but with a recognisable tint, and that is what makes this album work so well.

Released 2013 On The Fiddle Recordings