James Findlay - Another Day Another Story 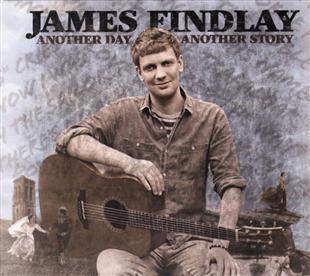 Listening to James Findlay is like having a folk singer in your front room. Winner of the BBC Radio 2 Young Folk Awards 2010, James uses his voice to fine effect and with minimal additional support. In this age of special effects, it is refreshing to listen to a singer whose voice is his primary instrument. His presence and style of delivery is powerful and undiluted, yet at the same time genuine and unaffected.

Another Day Another Story is his second album. It grows on you with repeated listening. The songs are mostly linked to the West Country, the region James comes from. There are familiar traditional songs here that many listeners will recognise, as well as lesser-known songs. All are rooted in folk history, captured well in the extensive sleeve notes.

The album starts with a sea shanty. Rounding of the Horn tells of the dangers of Cape Horn and the delights of Valparaiso Bay. Crystal Spring follows, a song from Folk Songs of Somerset compiled by Cecil Sharp and Reverend Charles Marson. Next comes the Child Ballad Henry Martin. There are several other songs collected by Sharp on the album and also another Child Ballad.

The Ox Plough Song is one of several unaccompanied performances. Another solo song, Down in Your Mines, is one of the most powerful on the album.

The Cuckoo is a song that will be familiar to many. This version comes from Tim Laycock and was collected by Peter Kennedy in Dorset. James’ rendition of The Brisk Young Widow is influenced by Pete Bellamy who, he feels, recorded the definitive version of this song.

James sings The Trawling Trade, by John Conolly, with heartfelt feeling, capturing the spirit of this sea song. Another great familiar song is Rosebuds in June, made famous by its link with Thomas Hardy’s Under the Greenwood Tree.

From here to the end of the album comes a run of songs, some well-known, others hardly known and specific to the West Country, all delivered with powerful simplicity.

The Beggar originates from one of the earliest known drinking songs, I Cannot Eat But Little Meat, which was first printed in 1557. The Watchet Sailor is another memorable song, unique to Minehead.

Then comes the well-known song Geordie, recorded by many including Joan Baez and Martin Carthy, the latter of whose version influenced James. James sings it with real feeling.

The album ends appropriately with Death and the Maiden, the classic story of an encounter with Death while on the road.

The performances on Another Day Another Story are flawless. James Findlay is one to watch, still so young, it will be interesting to see how he matures.