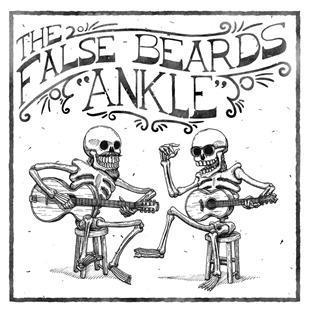 The False Beards have been in the music business for some time and as a result we can see a kind confidence and comfort in the arrangement of their music. They give us a good traditional kind of folk music, without trying to modernise or pull too far away from their roots.

The opening track The Sky has a very strong poetry throughout the lyrics, backed with soft guitar strumming that is gentle and soothing whilst the lyrics and vocals flow around you. The False Beards are foremost a string duo using a variety of guitar types to achieve their sounds, but they tend not to mix in more obscure instruments, keeping their arrangement very simple and uncomplicated.

This being said, other folk instruments make a guest appearance such as the squeeze box at the start of Oscar’s although this quickly takes a step back again for the fretted instruments to come back into the foreground.

The False Beards are a country blues band and the blues mix is very apparent in Oscar’s and The Spring of ’65 which sound only a few saxophones away from being jazz blues, but the country aspect of the genre does stay true throughout the album. The country and the blues aspects of the album work together well and keep each other well grounded without either taking over.

The False Bride gives us the guest vocals of Katie Rose who sings us a traditional song that was collected in 1909 by Cecil Sharp and re-arranged for this album adding a spice of variety to the album.

There are some good ’plucky’ songs in the album too such as Paint it, Black which is much more country in style and shows that a separation from blues is possible within the album.

We get another good traditional country sounding tune to close the album with The Panic is On which does a good job summing up the best qualities of the album and leaving it finishing on a great note.

Released 2013 by Ghosts From the Basement