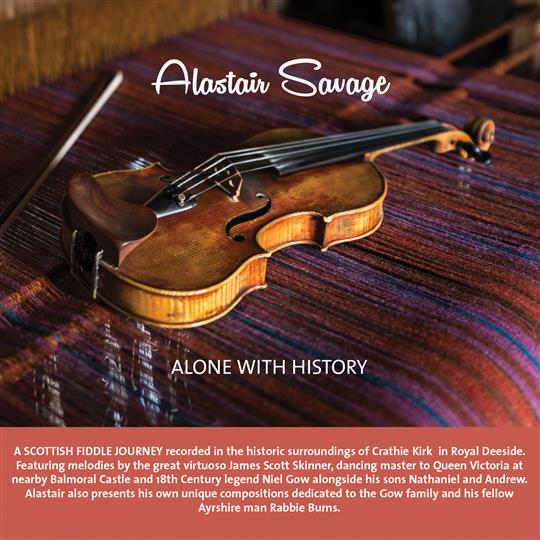 Sometimes it feels as if good sleeve notes are a dying art. Alastair Savage’s fourth album, Alone With History, is a masterclass, not only in terms of superlative musicianship, but also in how well-chosen explanatory text can hugely enhance the listening experience.

The spacious acoustics of Crathie Kirk, Balmoral, allow room for the full expression of the violin’s range and its sound has been expertly captured by engineer/co-producer Colin Stephen. The first five tunes end with applause from the live audience and, each time, it comes as a surprise, so blissfully silent are they during the playing.

Savage’s playing is beautifully expressive and masterful. His classical skills add subtlety and nuance to the reels and strathspeys, without losing sight of their underlying folkiness. Touches of baroque ornamentation breeze by, while seemingly familiar tunes like Ae Fond Kiss or The Bonnie Lass O’ Bon Accord become refreshed and revitalised. When Savage’s playing on the lively, choppy The Duke Of Atholl’s Catch instantly brought Phil Beer to mind, it was a genuine compliment to the talents of both.

There is a breathtaking effortlessness to Savage’s musical art: technical and intricate without ever overshadowing the music itself. The melancholy in Niel Gow’s Lament For The Death Of His Second Wife is most sensitively rendered.

On the dreamy, languid From Ayrshire to Perthshire, Savage’s violin sounds as though it’s being delicately shadowed by its own ghost: as if the historic resonances of the music and the building are making themselves felt in the present moment.

In essence, this is a tribute album: a heartfelt dedication commemorating the works of such influential Scottish fiddle composers as James Scott Skinner, dance master to Queen Victoria, and Niel Gow, together with his sons Nathaniel and Andrew. Musical settings of some of Rabbie Burns’ poetry feature too; the whole story being tied together by those indispensable sleeve notes.

Savage’s own compositions in celebration of these strong traditions top and tail the album, providing appropriate testimony to the men who made them and the musicians who continue to be inspired by them.

Scenes From Gow:
1. The Publishers’ Tea / Nathaniel’s Birthday
2. The Plaid Weaver’s Son / The Duke Of Atholl’s Catch / Sunday By The Tay
3. From Ayrshire To Perthshire / Chasin’ The Lassies
Dear Poet:
4. Ae Fond Kiss
5. My Love Is Like A Red, Red Rose
The Strathspey King, Tribute To James Scott Skinner:
6. The Queen’s Welcome To Invercauld / The Glenlivet / Spey In Spate
7. The Bonnie Lass O’ Bon Accord
8. The Cradle Song / The Iron Man / Sandy Grant
The Gow Family Tree:
9. Niel Gow’s Lament For The Death Of His Second Wife
10. Major Graham Of Inchbrakie / Duke Of Gordon / General MacDonald’s Reel
11. Countess Of Selkirk’s Favourite / Largo’s Fairy Dance / Major Molle
Three Reflections:
12. Hymn For The Masters
13. Alone With History
14. Your Light Will Shine On