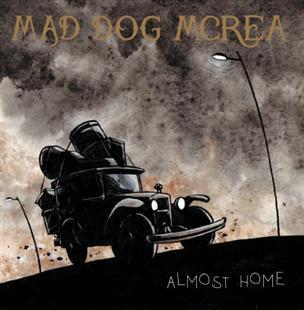 No messing. It’s straight into the fray with Mad Dog McRea, with the furiously rocking title track of Almost Home. Instant crowd-on-their-feet music. But this Sean Lakeman-produced album also shows a band capable of more than just partying. Although they are really, really good at partying.

Mad Dog McRea cram in so many musical references that it’s hard to keep up. Every track provokes moments of recognition of other genres, but not in a derivative way. These very able musicians manage to assimilate a huge range of musical influences, melding them seamlessly together. Onto a solid base of strong Celtic and traditional influences are grafted jazz, blues, bluegrass, pop, rock and even the odd Middle Eastern cadence. This is fusion music in overdrive. And it’s great, manic, foot-stomping stuff.

Singer/guitarist Michael Mathieson’s rich, raspy voice (think Chris Rea via Steve Knightley) is muscular yet nuanced. His homeland roots are brought to the fore on Irish-influenced songs like Devonside, and on Mad Dog Coll, about a notorious gangster in 1920s America. Staying with American influences, a vibrant bluegrass banjo underscores You Can’t Find Me, a defiant tale of World War I tunnellers.

The whistle flurry that opens Talking Through The Walls builds to a driving rock beat with a choppy guitar nod to Wilko Johnson, and tells a perky, if unsettling, tale of the local village arsonist. Almost Home, in which the police stop the band on the way back from a gig - an occupational hazard - is a whirling dervish of a tune, with a tinge of early Arctic Monkeys in the line “acid lights aglow”. There’s a rolling rockabilly swagger to I’ve Seen Things, while Heart Of Stone is a galloping romp - a hilarious complaint about a partner’s fickle mood swings. And it has an absurdly catchy hook.

Taking a brief break from the relentless pace, the band shows itself capable of reining in the fun and being subtle. There are two slower songs here, the tragic Whiskey Man, and the Seth Lakeman-penned The Sound, with its melancholy fiddle refrain containing faint echoes of America’s classic song Horse With No Name.

On this showing, it’s very easy to understand why Mad Dog McRea are such a live circuit favourite. Sing-along, toe-tapping, genre-busting, rollicking songs and an enormous, infectious energy. What’s not to like? This band really rocks.