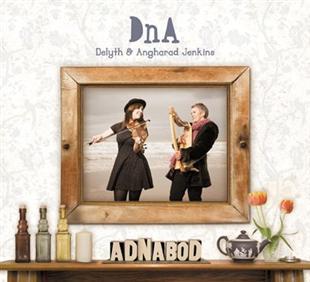 Delyth and Angharad Jenkins, a superb mother and daughter duo from Wales, have recently collaborated to celebrate and promote Welsh folk music. Having both already made a name for themselves as accomplished musicians on the traditional scene in Wales and often further afield, their recent partnership as duo DnA is certainly something not to be missed. New album Adnabod treats the listener to polished and sensitive performances, giving us the opportunity to appreciate both talent and music steeped in Welsh culture and heritage.

The aptly named album Adnabod introduces the special relationship between Delyth and Angharad with the word itself meaning ’to know (one another).’ In addition, as has been commented on by audiences already, and as any listener will soon discover, music is without a doubt in their DNA.

The album itself uses this idea of close ties in its quest to produce a sound and a feel that focuses on both the duo’s family and musical roots.

Delyth, an international Celtic harpist performs with great passion and brings to the album her experience and stunning musicianship. Fiddle player Angharad - who also plays with Calan - brings a fresh, youthful edge to the music. The combination of harpist and fiddle which forms the core of the sound makes for a compelling and interesting listen.

DnA are joined by Jim Evans (guitar and banjo), Lleuwen Steffan (singer-songwriter) and Vincent Guerin (double bass) who create a backdrop to the music which really does add texture and give great depth to the album.

Each track has been carefully arranged with improvisation, harmonies, arrangements and tunes combining in such ways that are truly innovative. While there may be a few pieces that the listener will recognise, the majority of the album is a journey into the unknown - but by no means a dull or unsettling one.

Instead, the album opens with a lively number, Gan Bwyll Jo/Y March Glas before moving on to reveal other tracks characterised by the delicate and intricate nature of the melodies performed. In ’Dolig Abertawe, the mesmerising interweaving of harp and fiddle is rather moving. The album combines the duo’s ability to compose and arrange with their interpretations of more traditional pieces.

Y Glomen/Marwnad yr Heliwr, towads the end of the album is a gorgeous Welsh folk song, sung with great emotion and strength. Despite the lyrics being a little hard to follow for some, its drama is carried through with the use of impressive instrumental arrangements and tempo changes. It certainly showcases and does justice to the beauty of the Welsh language.

Adnabod fuses two different generations of Welsh traditional music, united not only by strong family links but also by their passion and enthusiasm in their performance of Welsh folk music. For many listeners, the album introduces us to a whole new flavour of traditional music.

The album is undeniably unique and certainly reaffirms both Delyth and Angharad as inspiring artists. They understand the importance of recapturing the charm and unique qualities of Welsh folk music and do so with great character and enthusiasm.