Stuart Forester - A Yard of Ale 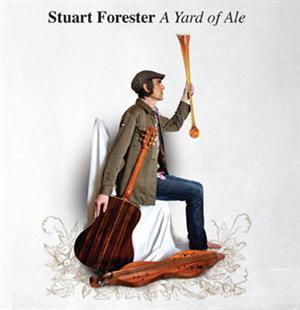 A Yard Of Ale is the second release from self-proclaimed folk troubador Stuart Forester. As its title would suggest A Yard Of Ale is an earthy celebration of folk music. It sounds like a lock-in at your favourite pub on a summer’s evening and atmospherically induces the woozy effect a yard of ale would have on most.

Ten of the twelve tracks on the album are Stuart Forester’s own creations. However, the subject matter and gently lilting phrasing of the guitar melodies are incredibly authentic - he has created some contemporary folk classics.

One that I had to do considerable research on to make sure I hadn’t heard before was The Yorkshire Rose - please accept my apologies if indeed it is traditional and my research wasn’t quite far-reaching enough. In a similar vein to the traditional track, ’wild rover’ but with a more sentimental and northern tilt. As a lover of Yorkshire, picking up the suggestions of the East Ridings and the Humber added pleasant geographical reminders to a gentle and light-hearted track.

I would put The Yorkshire Rose and Bramblefoot in the same category of songs which I would like to cycle down country lanes on a bike with a wicker basket wearing white cotton socks to. Old man Bramblefoot sounds like a character from Lord of the Rings - an omni-benevolent ent. The harmonium really adds a jolly element to an unapologetic joyful song.

Gitonyossie is the only solely instrumental track. It fits in with the feelings of Bramblefoot and The Yorkshire Rose, Forester’s mastery of the Appalachian Mountain Dulcimer is really incredible, and wonderfully showcased on this track. A musical treat in which the pace gradually grows and really gets your feet a-tapping.

It’s clear that Forester loves to tell stories. He is a musical raconteur, picking up stories along his travels and putting them to music. The most prominent of these kinds of songs on the release are The Star of the West, and Duke and Little Renie, the love story of a dustman and a dark-haired skin-head girl which is surprisingly touching.

The album ends with the relatively reflective track Valhalla, which is quietly restful - an effect emphasised in the soaring fiddle part. It is delicate and lovely.

Aside from his own contemporary folk classics Stuart Forester pays homage to traditional tunes. The Factory Girl is the first of these, slower and more soulful with simple guitar motifs which wonderfully compliment the principal tune. The other is The Watersons classic, The Cold Coast Of lreland. An lovely choice, and also a wonderful tribute to his childhood home of Hull - a centre for the fishing industry and a reminder of the death many have suffered at sea.

This is a storming release encompassing all sorts of songs and creating several atmospheres - whether it’s the stormy, cold Icelandic seas, a scene of farewell, bawdy nights out or or sunny lanes. It cuts back to what good folk music needs to be in essence; a brilliant story, simple musical motifs, and a strong voice and personality. Watch this space - there’s some real talented to be spotted here.