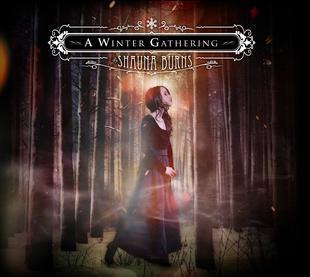 With Christmas just around the corner it is nice to see a variety of Christmas music. So for Shauna Burns’ Christmas release A Winter Gathering we get is a collection of carols and original songs with a nice Celtic twist, something not so immediately associated with Christmas music.

There are three songs in the collection that act almost like rest points, and these have been called ’songscapes’, consisting of Winter Star, Luma and The Gathering. These tracks are very soft and gentle with the piano as the foremost instrument.

Winter Star is a particularly mystical sounding track and definitely gives us a strong sense of Celtic influences, which differs greatly from Luma’which instead gives us a short but sweet style of playing, with the piano being key but vocals coming forward in a soothing chant.

The Gathering sits somewhere between the two sounds, mystical and soothing with both vocals and the piano taking the centre stage. Burns’ use of Gaelic in her songs adds immensely both to the mysterious feeling of the album and also to the beauty of the songs.

What is interesting is that the album is not simply a collection of songs, but is in fact telling us a story which flows through each track, so Winter Star represents the star that the wise men see and then each song develops the story further.

Her use of some very classic carols is an interesting move as it sets up a challenge to make them different and stand out. In particular Carol of the Bells and God Rest Ye Merry, Gentlemen hit the listener. They are, of course, recognisable for the songs they are, but they also strike in new, fascinating ways, particularly utilising the piano and in the latter song, the fiddle to support Burns’ vocals and immerse the listener in a fresh experience.

A particular risk is What a Wonderful World as comparisons with Louis Armstrong’s iconic version are inevitable. It is a risk that pays off though, as it is individual enough to come across as a Christmas song in its own right rather than a cover.

The star of the album is Silent Night which takes a famous song and completely reinvents it adding new levels. You can hear genuine emotion flowing into the song from Burns, again supported by great piano work that helps gives the song that polished zest.

This album is full of Christmas spirit, using classic and original songs to pluck at heartstrings whilst infusing the classics with a new perspective and new breath of life.