The Drystones - A Tale Of Sound & Fury 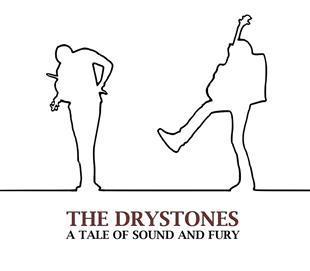 It’s been a few years since The Drystones released their first album - The Album (or what you will) - in late 2012. But the duo are back with twelve sparkling new tracks on a release deservedly funded by their loyal fans through Pledge Music.

From the first toe-tapping track, highlighting superb composing skills, to a slightly more melancholic, traditional song telling of the transportation of poachers in the 1800s, A Tale of Sound and Fury sees the band take on bigger and better things. And whilst the Somerset-based lads are now studying almost at opposite ends of the country, their relationship as musicians seems to have grown only stronger and more determined.

The new album once again captures perfectly the energy and personality of The Drystones - but this time both the music and the arrangements are certainly more sophisticated, showcasing how both have developed and matured as artists.

Ford Collier (guitar, whistles, vocals) and Alex Garden (fiddle, vocals) have certainly been hard at work since their last album. The addition of a couple of songs (Van Diemen’s Land and Rock of Ages) demonstrates how the pair continue to add strings to their bow. Already fine musicians and composers (note, for example, The Hemp Jig), Ford and Alex also appear perfectly comfortable tackling songs which require strong and emotive vocals - and while these songs may be newcomers to the normal repertoire, they break up the tune sets nicely and add variety to the album as a whole.

Once again, the duo call upon their adventurous sides to put together unique, hand-crafted arrangements, ensuring that all instruments enjoy a moment in the spotlight. The result is that each track on the new album is wonderfully textured, with individual strands of sound and character so tightly woven together that the end sound is bold and exciting.

What continues to be evident on the second album is that the duo really do enjoy playing and working together. In experimenting with different sounds and arrangements the pair steer clear of the norm and do so with real gusto and passion.

The Drystones: back and better than ever. With A Tale of Sound and Fury expect the same energetic, dynamic and flawless handling of tunes at break-neck speed, but with an added air of sophistication. Do keep your eyes and ears open for these rising stars as they prepare to take the festivals by storm this summer.