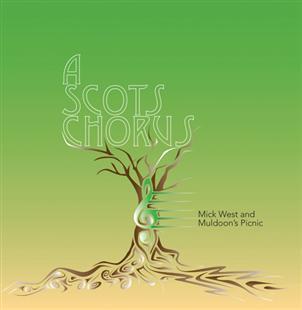 A Scots Chorus brings together the esteemed Mick West as singer and interpreter of traditional Scottish songs and a capella group Muldoon’s Picnic. Together, they aim to inspire fellow singers with their hearty and beautifully arranged chorus songs.

As such, the album is very much focused on song, voice and narrative but the addition of instrumental arrangements is invaluable as a means of defining the melodies used and creating a really powerful sound. A mention should thus be given to: Stewart Hardy (fiddle), Frank McLaughlin (guitar), Angus Lyon (accordion, piano) and Penny Callow (cello) whose flawless contributions to the performances enhance but never distract from the vocals.

Mick leads much of the singing with great authority and strength, confirming his expertise and status as a well-respected and widely enjoyed artist. Muldoon’s Picnic with their gorgeous harmonies reinvent and give each song a fresh feel and sound. Each song on the album has been carefully selected on the merits of being both interesting and representative with the careful arrangements of the songs reflecting this.

Fisherrow is a great example of a song packed with interest from both the point of view of the story told and the technical proficiency demonstrated by the choir and Mick. Layers of lyrics overlap and loop which make for an intricate and exciting arrangement. And for listeners dwelling South of the Scottish border, there are extensive sleeve notes to help out until the ear tunes into the dialect - wonderful as it is to hear!

The overarching idea of the album itself - to explore the relationship and possibilities which arise when working with different groups of singers - is intriguing and the use of a whole chorus of voices is certainly a rarity when it comes to performing traditional music. Muldoon’s Picnic do a sterling job of both singing in unison with Mick or - as in Mary Mack - choosing to experiment with rhythm, pitch and harmony.

As mentioned, the album comes with its own unique aim and resulted in a memorable performance at the 2013 Celtic Connections which saw hundreds of community choirs engage with, and share a collection of songs which are truly loved by many and deserve continued public outings.

This unique goal can certainly be said to have been achieved, for what better way to encourage people to explore Scottish traditional chorus songs and use them as inspiration for their personal repertoires than a visit to Scotland itself through A Scots Chorus.

Released in 2012 on Claytara Records