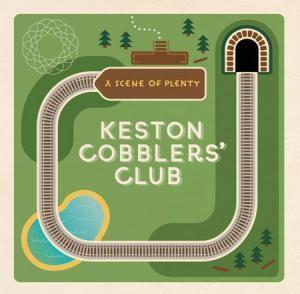 A Scene Of Plenty, the new EP from the Keston Cobblers’ Club is no less than a foot-stomping musical extravaganza. The five band members - with the help of folk and indie influences - have certainly put a new and exciting spin on traditional music. The result is a truly unique collection of songs showcasing great skill and a real ear for interesting arrangements, melodies and lyrics.

The band is made up of Matthew Lowe, Juila Lowe, Tom Street, Harry Stasinopoulos and Bethan Ecclestone and base themselves and the music they create on the old folklore of the Penniless Cobbler in Keston. By throwing barn dances he was able to both cheer himself up and create much-needed business by repairing the soles of the shoes of his dancers. If that doesn’t spark intrigue then the general up-tempo, energy and creativity of the five tracks certainly will. This quintet has, without a doubt, done the Cobbler of Keston proud.

The band has a very distinctive sound, teaming traditional feeling melodies and instruments such as banjo, accordion and guitar with fresh, vibrant styles and big sounds thanks to a few louder brass instruments. The group performs with raw energy and holds close a very special and particular ethos.

The album opens with The Children Who Wear Socks On Their Heads, an upbeat number with accordion and percussion leading a driving riff towards the introduction of powerful vocal performances. The singers on this track and throughout the whole EP demonstrate raw talent and sing with such compelling tones that allow stories to be told with real honesty and passion.

Beam, with its arresting instrumental arrangements and often unusual harmonies confirms the band’s originality while the final track, Castle, acts as a contrast to the livelier pieces, allowing instead for slightly more delicate arrangements to creep into the flow of musical ideas. It is ideal as a conclusion to the EP with such lyrics as ’See I will spoil you every day and build that castle in your name’ leaving the listener with lifted spirits.

The gritty vocal performances in We Will Heel Your Soles (which harks back to the story of the Penniless Cobbler) teamed with the full and rich sound of the brass instruments demonstrates beautifully how accomplished the group is not only as musicians and singers but as performers. The dynamic of the band with their individual sound and character engages the listener and makes their experience of the EP much more enjoyable.

A Scene of Plenty: no less than full of pizzazz. An explosion of talent with an infectious level of enthusiasm and vigor.

1. The Children Who Wear Socks On Their Heads
2. Beam
3. A Scene Of Plenty
4. We Will Heel Your Soles
5. The Castle