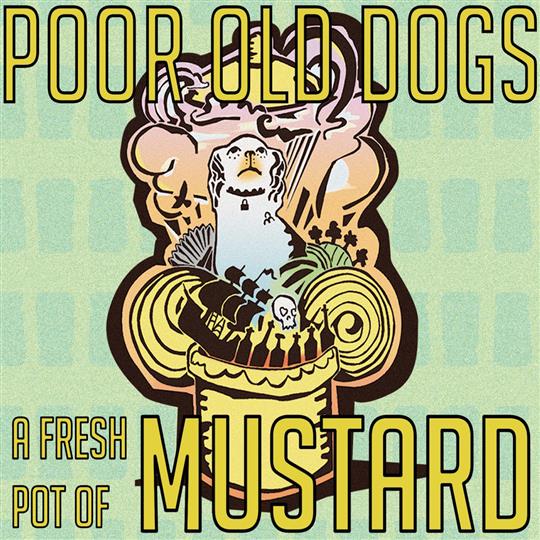 Poor Old Dogs are a five-piece folk-punk outfit from Bristol who, after spending two years honing their sound at gigs and festivals in the south-west of England, have released their debut album, intriguingly titled, A Fresh Pot of Mustard.

There are thirteen songs offered on the album, most of them written by the lead singer and guitarist Jack Murray Francis, who wears his influences on his sleeve. There’s a lot of The Pogues here mixed in with ska, reggae and even a little Zimbabwe Jit.

The song’s subject matter is eclectic from fishmongers to designated weirdos, with references to drinking and finding your way home after a particularly heavy Friday night.

The album has its gentler moments too. Francis channels a peculiarly English sense of surrealism in Industrious Little Nippers whose freewheeling stream of consciousness lyrics manage to rhyme the world nippers with strippers. The track is also notable for being recorded outside, as birdsong can be heard throughout the piece. Of course this could just be studio trickery, but it lends the song a lovely ambiance.

The al-fresco song making continues with a spirited rendition of the traditional favourite Jack Hall, which also seems to be recorded in the same field. The sound of seagulls accompanies an acapella rendition of Whiskey Johnny sung with more enthusiasm than harmony which, probably, makes this a more accurate version of this oft-recorded shanty.

A word of warning. If this was the 1990s this album would come with a dirty big Parental Advisory: Explicit Lyrics sticker. Sometimes this works, as on the album’s Poguesque closer, Immoral in Balmoral, at other times it just seems slightly juvenile.

Incidentally, Immoral in Balmoral contains the great line, ’Twitching curtains make me nervous’ which your reviewer first misheard as, ’Richard Curtis makes me nervous’. Make of that what you will.

Released by Cantabank Music on 11th May 2015