Said The Maiden - A Curious Tale 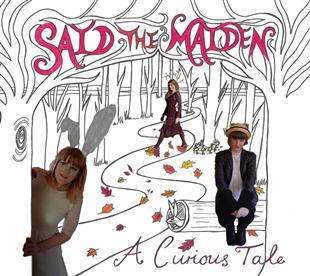 Vocal harmony groups have made a bit of a come-back in popularity amongst young performers lately, and Said The Maiden is a fine example of a band based in this tradition.

The group consists of Hannah Elizabeth, Jess Distill and Kathy Pilkinton, three ’maidens’ from Hertfordshire. A Curious Tale is their debut album, following on from a well-received EP, Come Hither, which was released last year. Since then, knowledge of the group has surged as they’ve performed as support for a whole host of well-known names, including Jim Moray, Dave Swarbrick and Hannah James & Sam Sweeney.

The album consists primarily of English and American traditional songs, with a couple of original pieces thrown in for good measure. Each track displays exquisite vocal quality and spot-on harmonies. Indeed, you’d never guess that they only began performing together two years ago, such is their synchrony with each other.

The record opens with The Fine Young Smith, a traditional song put to a modern tune by Kathryn Roberts and Sean Lakeman, which has been reworked by the girls into a three part a cappella harmony piece.

Another treat in store is Shady Grove, a song from the band’s EP which has been extended, including the addition of a fiddle line by Dave Swarbrick. Indeed, although Said The Maiden are best known for their vocals, a few instruments have made their way onto the album, so as well as the fiddle you can expect to hear a mandolin, penny whistle and accordion.

In terms of original songs, the first on the album is A Sailor’s Promise, which features such clear and pure vocals that it almost feels choral. Secondly, there’s The Rabbit’s Bride, featuring guest vocalist James O’Hara. This is a song with interesting beginnings, as the idea for it was struck upon when the girls Googled the words ’said the maiden’ and found that one of the most popular hits was a line from a Brothers Grimm fairy tale named ’The Rabbit’s Bride.’ Thus a song was soon born!

On the whole, this is a strong debut album, featuring a veritable feast of favourite folk songs which have been reworked to great effect. Old is mixed with new, and traditional with original, in what is bound to be a popular record with everyone who lays ears on it.