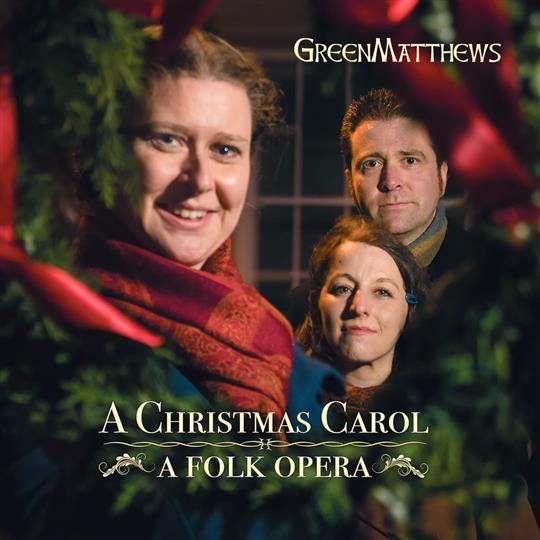 Following in the footsteps of Fairport Convention’s Babbacombe Lee and Peter Bellamy’s The Transports, Green Matthews’ A Christmas Carol presents itself as a ’folk opera’. With twenty songs stretching over an hour, it retells the tale of Charles Dickens’ renowned Christmas story by putting new lyrics to well-known carols and traditional tunes.

Green Matthews are Chris Green, (vocals, guitar, mandocello, piano, accordion, bass guitar and drums) and Sophie Matthews (vocals, flute and English border bagpipes). For this album they are also joined by Pilgrims’ Way’s Jude Rees who joins the duo on melodeon and oboe.

Musically, the album brings to mind some of the much-celebrated Christmas albums by Maddy Prior and The Carnival Band, with their inventive arrangements of well-known carols and their vast array of different instruments. However, the latter have often spiced up their traditional Christmas fare by delving back in time and unearthing one or two obscure but captivating tunes to accompany the more familiar ones.

Although Green Matthews offer us beautiful, luscious arrangements of well-known tunes, it would perhaps have been nice to have heard a few less familiar ones, as well. One cannot fault the musicianship, however, and it is lovely to hear such tunes played so beautifully on such a well-produced album.

Lyrically, apart from a couple of clumsy lines here and there, the story of Ebenezer Scrooge is translated into song in a thoroughly engaging and entertaining way. Vocally, the duo have sought to avoid the twin clichés of the “finger-in-the-ear folk voice” on the one hand and “musical theatre camp” on the other, we are assured in the album’s accompanying publicity. This they certainly achieve and the songs are delivered with sincerity and passion and a complete lack of affectation.

For those looking to expand their festive folk selections this year and wanting something a little different from the plethora of carol anthologies and traditional Christmas songs, this brand new folk opera based on Charles Dickens’ finest may well just do the trick - a worthy addition to any collection.