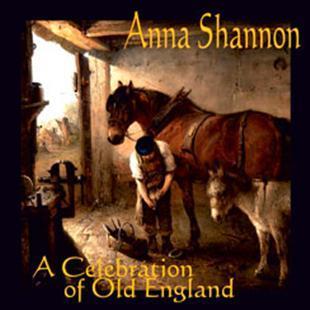 It would be hard to find a more authentic and heartfelt portrayal of old England than this. Anna Shannon has a strong, distinctive voice and is a talented multi-instrumentalist; each track is carefully constructed and orchestrated.

The instrumentation complements the songs beautifully - period instruments such as
wind instruments, drums and the bowed psaltery feature on many of the tracks. Even the guitar, which provides most of the backing, has a very traditional sound.

With the exception of the medieval carol Gaudete, all of the songs are Anna Shannon’s own compositions. Her songwriting style is plain spoken and straightforward, relying on events and retellings rather than convoluted imagery to convey atmosphere, although her lyrics are certainly not without poetry ("Old Beggar’s the boldest, and Tim wild and keen / His coat tails are flying straight into the stream", from Ways of the Hunting). Her stories are engaging and complex.

The songs often incorporate layered vocal tracks, which is particularly effective in the
unaccompanied songs Gaudete and Ways of the Hunting.

Some songs are cheerful, celebrating the people of the time - such as Craftsmen of Old
England, a tribute to thatchers, ironmongers, brewers and other craftsmen. Hereandgoneagen is a lighthearted ditty about a travelling musician and his dancing bear, although it turns more serious when he has to run into the woods to escape Cromwell’s men.

However, despite the album being a celebration, it never shies from depicting the darker side of Old England. Polly Cooper is the sad tale of a young maid who is taken advantage of by her master and dismissed from employment. "Take pity on a serving girl," she pleads with the listener, "for what am I to do?" Old Bob and the Poacher, although more cheerful, reminds us that hard times are never far away ("And I’ll not stand and watch / While the rich take the lot / And my woman and kids they do starve").

A Celebration of Old England is a rich and varied tapestry of songs by a powerful writer and musician.