The Mather Robinson Band - A Carousel for Fools 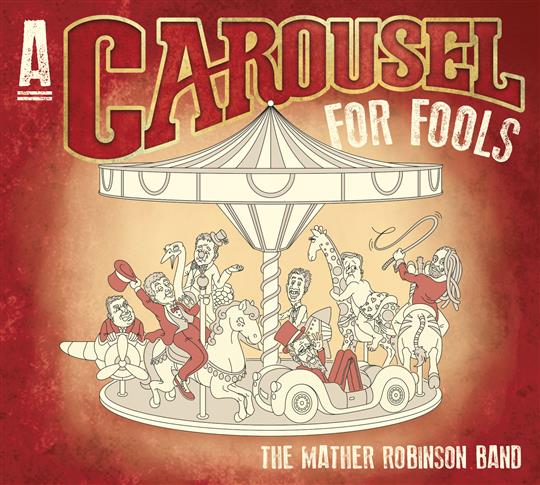 A Carousel for Fools is the second album by the Salford-based The Mather Robinson Band (their first CD, titled In Time, was released under the name Mather & Robinson). It consists of thirteen tracks, eleven written by long-time musical partners, Dave Mather and Pete Robinson.

The two songwriters, who play guitar and mandolin, are joined by Irish flute player Anthony Quinn and bassist Chris Mather. All four members sing lead vocals. There’s also plenty of drums on the album but no indication on the sleeve notes as to who this might be.
Lyrically, the thirteen songs continue to explore the themes and concerns of their debut release, such as social injustice, war and drinking.

Sibelius gets the album off to a rousing start. It’s a drinking song inspired by the titular Finnish composer who, in his youth, was something of a drinker and a firebrand. The song is robustly played and sung, even if the lyrics are, deliberately, a bit silly and nonsensical.

’Silly’ is not a word that could be applied to any of the other pieces on the album. Both Men of Constant Sorrow and We Won’t Lie Down are social justice songs concerned with the plight of the undeserving poor (a phrase repeated in both pieces). The latter song ends with the final couplet from Shelley’s The Mask of Anarchy written to commemorate the Peterloo massacre in 1819.

There are story songs, too. The Vicar of Barton Wood is the fictional tale of a young vicar led astray by the women of his parish whilst My Old Town reminisces about the Salford of the band’s childhood.

One of the most powerful songs on the album is Please Monsieur. This piece has its basis in a childhood memory of a legless beggar who implored Robinson not to join the army. The lyrics take the form of a monologue by the soldier telling of his time in the Great War. What makes the song work so well is the sparseness of the arrangement for guitar and mandolin. The use of silence for dramatic effect makes this the standout song on the album.

The Mather Robinson Band acknowledge their roots in traditional music by closing the album with a version of that old favourite, John Barleycorn. Although well-arranged and sung, the song, at over seven minutes in length, outstays its welcome a little (a fault of some of the other longer pieces on the album). Anthony Quinn’s flute playing, as it is on the whole album, is faultless but, sometimes less can be more.

A Carousel for Fools is an album to be played loud, and will surely delight fans of this very northern, very idiosyncratic band.