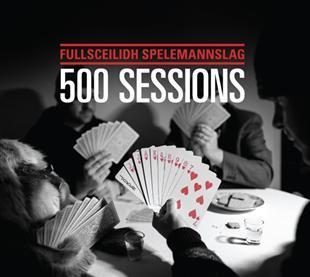 This 2013 second album (named after the card game ’500’) by the sizable Shetland band incorporates a quirky collection of melodic Nordic and traditional tunes.

Curiously, the band name derives from combining the words ’full scale ceilidh’ and the Nordic word for a gathering of fiddle-players and other instruments. Formed in 2005, Fullsceilidh’s talented musicians are known for their high energy performances with substantially foot-stomping effects. After their greatly successful debut album Spreefix (2009) this long-awaited album doesn’t fail to surpass high expectations.

The theme of the album is immediately set by uplifting and jolly tracks such as Craa Dang Pussy and Spreefix. These ever-twisting and changing tunes are strongly lead by the many fiddles that demonstrate the musicians’ talent for tightness of play. The great variation of pace makes them a riveting listen.

Liz Carroll’s is cleverly arranged, with a pleasing contrast of the soaring fiddle melodies and the grittier undertones of the guitar and drums. Pure Candy and Daner’s Tunes are, appropriately, highly evocative of ceilidh dancing with a mildly circus-esque vibe.

Redbird stands out with a strong mandolin-led theme throughout, whereas Da Blinnd Deuk stands as a simpler yet no less charming set that boasts intricate fiddle harmonies.

Trip to Austin, Cavers & Dreamers are the slower-paced tracks; enchanting, swinging and a little melancholy, they highlight the dexterity and variety of the band’s skills. The Cavers set stands out on the album as particularly beautiful.

500 Sessions proves a perfect balance between the instantly recognisable tones of traditional folk with the more foreign yet greatly successful incorporation of Nordic sounds. Varied in pace and emotion, this album is a thoroughly pleasurable listen that would appease anyone and everyone.