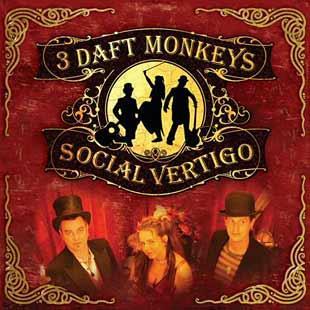 This review is perhaps a little late, given Social Vertigo came out back in March. However, having originally been pointed to the Daft Monkeys via a video on YouTube, and then quickly snaffling up the full album, it’s become one of my favourite CDs of the year, never far from my playlist. A mix of various influences, Social Vertigo is undoubtedly folk at heart, and while stirring in other styles including eastern European and African tinges, has a quirkiness and a sense of wit which seems inherently English.

That YouTube track which first caught my attention is the album opener, the glorious ’Paranoid Big Brother’, a beautifully judged swipe at our expanding State Apparat, a slice of folk-pop which grabs you immediately and which typifies so much of what is to come - namely strong lyrics and infectious, lively music. As an aside, I’ve no idea what it takes to get into the charts these days, but I can’t help feeling that a campaign group such as No2ID really ought to latch onto this and push it for the Christmas number one.

The album then bounces along into ’Eyes of Gaia’, an anthem about those days when you just can’t be bothered, when the spark is lacking, and you need to rediscover your passion for life.

There is a slight stutter on ’Human Nature’ which doesn’t have the same impact as the earlier tracks, and which feels overly long. However, the album picks up again with the gentle ’Go Tell The Bees’. Then, following ’Guardian Angel’ comes the slower ’Since’, a song reflecting on the mixed emotions that come with bereavement, and a more contemplative pause before the album launches into a rumbustious and highly danceable second half.

I don’t doubt that 3DM come from a rather different political outlook than my own free market libertarianism, and ’One Fine Day’ has the sort of lyrics which would have grated as naïve hippydom a few years back. But there is something undeniably joyous in the utopianism, and the exuberance of the playing which makes me more than happy to just ’go with the craic’. This continues into the title track which, with its gorgeous Romanian(?)-tinged violin intro, is probably my favourite on the album. An observation in drunkenness, it combines another tune that almost challenges you to defy its rhythm, along with clever lyrics, and a perfect vocal from Tim Ashton, who gets the comedic timing and delivery spot on.

’Little Secret’ is a rocker which at times seems to be channelling 70s’ Tull - always a good thing if you ask me - if without that distinctive flute. And then there’s the penny whistle driven ’Let’Em In’, a lament for the old time local boozer, and the characters who inhabit them. The African-tinged ’Monkey & The Slippers’ is an atmospheric tale of a journey to Tangiers, kasbahs, and unprepared-for cultural challenges, and another personal favourite, before the album wraps up with the instrumental ’Dance of the Old Man of Storr’.

Overall, more than any other CD I’ve heard this year, this one makes me want to unsheathe the air violin and bounce around the room like a mad fool. And that perhaps is its greatest charm - it is an intelligent, well-constructed album, but above all else it is a huge amount of fun.