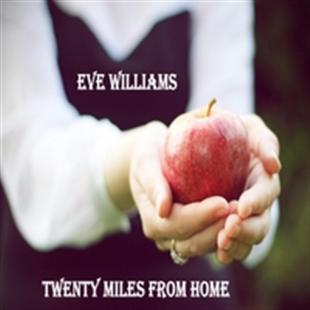 Twenty Miles from Home is a self release from Eve Williams. She pares simple instrumental parts with theatrical vocals, and influences such as Kate Bush and Sinead O’Connor shine through.

While vocally Sinead and Kate are obvious throughout the album, in Diamond Shine Eve exhibits a slightly Morrissey-esque vocal range, with finger picking guitar and strummed chords with are very reminiscent of the Smiths.

Between the Lines showcases some lovely lyrics which are poetically soulful, but on occasion Eve’s vocal range seems a tad strained in the lower notes.

Broken Dolls exhibits a brave pairing of tonally different voices which may not be to everyone’s taste. Though sentimentally touching the duet sounds a bit discordant at times, though the main theme is hauntingly pretty.

Talking of achingly soulful musical parts, Between The Lines has some really special moments as along with the gentle plucking, plodding tone and Eve’s deep voice there is some brilliant instrumentation - in particular a bluesy guitar riff that is really atmospheric. And the simplistic rise and fall in the piano part for Ailsa Craig is mesmerising.

The lyrics to Oblivion are outstanding, along with the main piano and drum parts - however at times the sound is a bit too epic; the theatre of the piece could have been achieved more dramatically with a more paired down sound. This could be said for a couple of other tracks too.

Twenty Miles from Home is tonally ethereal and the instrumentation works really well when simplistic and pared down. I can imagine that Eve Williams casts an atmospheric spell over live audiences with gentle yet other-worldly melodies and a wonderful rise and fall in the vocal range.