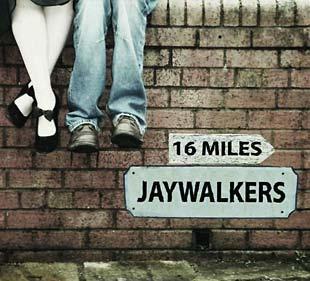 16 Miles is the debut album from the Jaywalkers, BBC Young Folk Awards finalists in 2009. Michael Giverin and Jay Bradberry play American-infused folk on mandolin, fiddle and guitar, with Jay also singing on some tracks.

The album opens with Lonesome Fiddle Blues, which strangely is actually a bouncy upbeat tune with a lot of momentum. The title is questionable, but the playing is not, being tight and confident, including some wonderful mandolin from Michael.

My Sweet Little Miss has Jay singing vocals, producing a slightly smoky voice with a tinge of bluegrass, unsurprising when the duo originally met at a bluegrass jam session.

Wayfaring Stranger is an old standard, whose origins may lay in the fields of the American South. It is a great sound, but Jay perhaps pushes too hard trying to stamp her own authority onto the vocal. This is one case where less might be more. Shady Grove also falls a little flat, again falling into the difficulty of being a very familiar song.

However, Delphi Lodge, written by Michael is truly beautiful. A tribute to a group of workers during the Irish potato famine, Jay provides real pathos to a tune and lyric that pulls at the heart strings.

Aughrim is a tune which builds in excitement and tempo, whilst Ivy Cottage is fast paced throughout. Both are thoroughly enjoyable and not recommended for driving to.

Nowhere is the bluegrass influence stronger than in Caleb Meyer, with a performance direct from the Deep South of gore and ghosts. Here the balance of originality and the musical style finds a good balance.

The best lyric of 16 Miles must be in Let Me Be, based on an old Lancashire poem ahead of its time in terms of ’girl power’. "A witch, a witch they cried, because I’m single and free" can resonate with feminists and perhaps also lovers of Monty Python in equal measure.

The album ends with an interesting little tune. The Candle-Lit Waltz is a very lazy tempo waltz, invoking images of whiskey and the Deep South. However, once the listener is lulled into this vision the tune shifts, with snatches of Latino style music being added in.

Jaywalkers demonstrate a keen musicality, a good ear for tunes and songs, and an obvious love for their chosen style of playing. There is some room for development from this young duo, but 16 Miles is certainly a good step in the right direction.