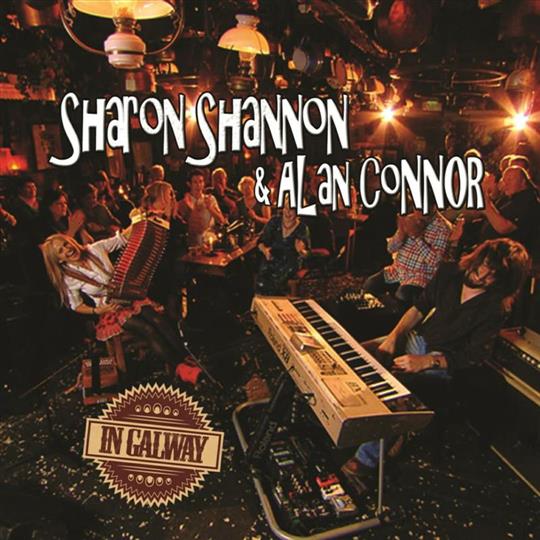 Prolific and versatile accordionist Sharon Shannon is well known in her native Ireland for her collaborations with an impressive array of performers, including members of U2, Sinead O’Connor, Jackson Browne, The Chieftains, Nigel Kennedy and Alison Kraus. She has sold more than one million CDs and enjoyed several number one albums.

In Galway sees Sharon performing with Dublin-based multi-instrumentalist Alan Connor in the intimate confines of O’Connor’s famous pub during July 2014. The CD/DVD set is a sharp contrast to Sharon’s recent studio albums: 2009’s Saints and Scoundrels featured her big band and guest vocalists, while 2012’s Flying Circus was a collaboration with the 52-piece RTE Concert Orchestra.

The Bungee Jumpers has appeared several times since its 1994 debut but here a new piano and stomp introduction accompanies a brief tour of some of the venue’s weird and wonderful artefacts. Sharon’s frenzied accordion tune starts proper as the camera pans to the duo and is all the more exciting with Alan’s skilled keys. There’s an Italian flavour to Coridinio, then Sharon sets aside her accordion in favour of a whistle for the evocative Rathlin Island. Alan provides vocals and electric guitar for American prisoners’ song Midnight Special, which is paired with a short, faster rendition of Windchime Dance.

It’s back to accordion and piano for the soothing beauty of Little Bird but later, Sharon plays fiddle on The Woodchoppers, while Alan bounces around the piano on this memorable piece. But it is on Donal Lunny’s Cavan Potholes that Alan truly shines, with his blues roots coming to the fore. The medley is played on electric rhythm guitar and accordion before the guitar part is looped and he adds an impressive guitar solo while Sharon takes a backseat, watching admiringly. As the piece nears its conclusion, he plays piano and guitar simultaneously in a battle that is a wonder to witness.

By the time that Sharon’s signature song Galway Girl is reached, the small but appreciative audience is swaying, tapping and clapping along to their local heroine. The song is coupled with a compelling version of Penguin Café Orchestra’s Music for a Found Harmonium, which closes the DVD.

Sharon Shannon and Alan Connor’s two years on the road have served them well, as In Galway demonstrates so well. The collection of Sharon’s hits is performed to perfection as they each anticipate and react to the other’s moves, producing a large sound that draws the listener into their world.