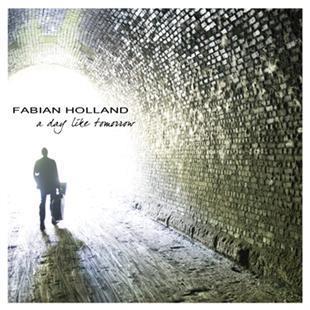 A Day Like Tomorrow is the new release from Fabian Holland, whose self-titled début album saw the singer-songwriter being praised for his strength and prowess as both singer and musician. This year, Fabian presents to us a feast of original and traditional tracks, brimming with lyrical gems against an intimate and immersive backdrop.

The album is made up primarily of self-penned songs with The House Carpenter and Nobody’s Fault but Mine being the only two traditional tracks. Fabian, a superb guitarist, is joined on the album by Fred Claridge (drums, percussion, backing vocals), Jacob Stoney (keyboards, programming), and Mark Hutchinson (bass guitar, percussion, electric guitar, backing vocals). Together, the musicians create a subtle, distinctive, fresh sound, while still allowing the main focus - charming vocals and elegant guitar accompaniments and compositions (particularly in Morning Mist) - to shine through.

As a skilled musician and writer, Fabian excels at capturing human emotion within his songs, using themes which evoke a shared belief among listeners. Four Inch Screen, both accurately and lugubriously highlights how many forget how to enjoy special occasions without furiously trying to record them all: a real modern day dilemma. Equally, Spring uses wit and imagery we are all too familiar with to celebrate ’lily white legs’ and ’pints of Becks’ as the sun reappears.

All songs are delivered with real passion and energy - both those which are personal to Fabian, and those which instead allow him to showcase a real artistry for arranging ballads and traditional songs. Those based on Fabian’s own experience allow the whole album to take on its own personality - one where the listener feels that they are not just enjoying the songs and tunes, but meeting with, and getting to know the artist himself.

A Day Like Tomorrow: from Scottish ballads to spiritual struggles, Fabian Holland delivers each track with real ingenuity and flair. For folk with a modern flourish, it is a must listen.