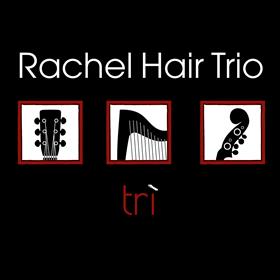 The Rachel Hair Trio returns after a recording absence of six years with their second album, the simply titled Tri, which is Scottish Gaelic for ’three’.

Unlike their 2009 debut No More Wings, the three musicians play everything on this release without relying on guest performers, in an attempt to capture their true sound. With inspiration for the collection’s original compositions drawn from Celtic folklore and personal experience, there is also room for a sprinkling of traditional and contemporary pieces.

Rachel’s beautiful, catchy but brief harp tune Saturday Night Club begins first track Jigs for Mann, but it is all too quickly replaced by Cameron Maxwell’s trudging double bass introduction of The False Walk (to Ramsey), an instrumental document of an imagined trek over the Isle of Man’s only mountain Snaefell to reach a ceilidh. Traditional Manx slip jig Ta Cashen rounds off the selection, soon followed by a gentle, melodic quickstep arrangement of James Scott Skinner’s fiddle reel The Duke of Fife’s Welcome to Deeside.

There’s a change of direction as Jenn Butterworth’s guitar and vocal take centre stage on her questioning song Angel, before a version of jazz pianist and accordionist Tom Gibb’s The Marching Gibbon returns to the instrumental format, in an arrangement featuring some wonderfully deft double bass alongside Rachel’s flowing harp rivulets and Jenn’s subtly handled guitar chords.

Haunting and poignant traditional Scottish Gaelic song Mo rùn geal dìleas appears in an English translation as My Darling Fair One, which tugs on the heartstrings as Rachel plucks at the harp strings. The song gives another chance to enjoy Jenn’s gorgeous vocal intonations, as with Roll on the Day, Allan Taylor’s sad song about a friend who suffered from the effects of toiling in dust-filled workplaces.

Album closer The Doctor, titled from the nickname of Cameron’s border terrier, features his playful, gamboling composition of the same name, coupled with a foot-tapping rendition of traditional Norwegian piece Rundtom I D Etter Christian Horne, which is included as a tribute to the stunning country where the trio often tour.

With Tri, the Rachel Hair Trio has produced an accessible and thoroughly enjoyable album of stripped back yet up-to-date harp-driven folk, while successfully avoiding any of the clichés that might be implied.