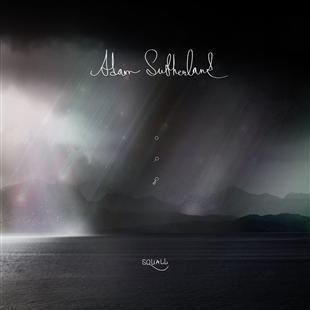 In May 2013, highly accomplished fiddle player Adam Sutherland released his debut solo album. It has no doubt been a long awaited release and for good reason. His high energy, captivating performances with such well-loved groups as The Peatbog Faeries, Session A9, Babelfish and The Treacherous Orchestra certainly makes this new endeavour an exciting and highly anticipated one.

Showcasing nine self-penned tunes, Squall showcases Adam’s undeniably impressive ability to compose, arrange and perform material of a high quality. With much of his previously written music having been recorded by highly acclaimed artists and played in traditional sessions across the world, the release of a solo album seems a natural move on Adam’s part.

An all Scottish band surrounds Adam but when the fiddle bursts in through the various rhythms and embellishments, his dexterity and skill outshines all. The gorgeous tone he produces certainly complements melodies that explore the full range of both Adam’s fiddle and his musical creativity.

The listener can expect driving rhythms and funky bass riffs that really enhance Adam’s performance and for that we have Marc Clement, Iain Copeland and John Paul Speirs to thank.

It is an album void of songs but the listener should not apprehend traditional tune sets and standard musical frameworks. Instead, they should expect originality alongside a whole host of impressive techniques showcased by Adam in a slick and flawless manner.

Adam’s inspiration comes from a host of stories, people and places, taking the feel and dynamic of each track in different directions. Despite being united by traditional Scottish influences the listener can also enjoy a taste of his interpretation of gypsy and Eastern European sounds amongst others.

The variation in sound, tempo and aura makes Squall an incredibly apt choice of title. This on-going contrast throughout the album indeed reflects the often dramatic and quick changes in weather.

Adam begins the album with a set of tunes - Thorb The Robot/Rosie Shand of Grantown - that is almost certainly already getting the crowds dancing. But music that gets people on their feet is equally as important as that which is a tad more delicate in its nature. Adam has no problem with either. Iris - a tune named after his grandmother - explores the textures of the fiddle with real emotion and the result is sublime.

The album’s finale is the wonderful Mad Mike’s Return To Rum/The Roy Bridge Reel. Adam uses the word ’craic’ to describe this set on his sleeve notes and it certainly is a lasting reminder for the listener of a beautiful and joyous collection of tunes.

Squall: nine exquisite tunes from an excellent musician. It is a golden opportunity to discover the music of a wonderful and influential Scottish fiddler.