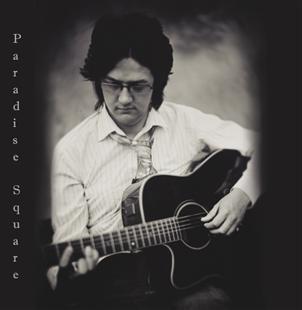 Patrick Rose may originally hail from around Manchester, but his music is certainly Yorkshire bred if not Yorkshire born.

The soothing strumming of the guitar makes for a relaxed tone in the traditionally-inspired instrumental track, Bonny at Morn. Continuing on the traditional theme, the album also presents a rendition of the well-known favourite, Lord Randall.

Some of the strongest tracks on this album, however, are the songs written by Rose inspired by his trips on the Sheffield Steel City Ghost Tours. In the title track, Paradise Square, for example, Rose takes a tale of Sheffield steelworkers’ fight for fair pay and weaves this into a great set of lyrics.

Blinded by Devotion is another track along this theme, with an interesting story from nineteenth century Sheffield put into the mix. In the traditional folk way, this is music which tells the stories of the people.

Overall, this is an album which shows plenty of promise and good old-fashioned Yorkshire heart. Give it a try to hear reworkings of traditional tracks as well as new ones with some fascinating local tales.