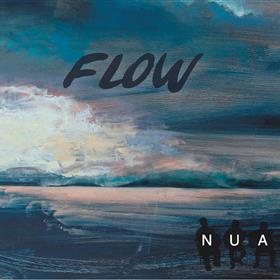 A nice, clean, uncluttered sound, it is the interaction of the rhythms of the guitar and the bodhrán with the melodies of the fiddle that really make this band. However, that is not to suggest for a moment that the guitar and the bodhrán just remain in the background while the fiddle takes centre-stage. Launching their new album, Jacob McCauley recently explained, “We wanted to have three members that equally share the spotlight so to speak. Where each member can take on multiple roles depending on what is going on musically. Obviously when it comes down to it, we only have one melody player, but the guitar and bodhrán both have their moments to speak melodically instead of just rhythmically. The fiddle also has times to lay back and keep a more rhythmic feel or a more subtle drone.”

The result is an album of twelve original self-composed tunes, half joint compositions by fiddle-player, Law, and guitarist, McGillivray, and the remainder written solely by one or the other.

Opening track Wide Open makes for an uplifting start and sets the album up nicely, beginning with some bright, sunny-sounding guitar before being joined by some lovely fiddle that darts and dances around.

A whole album of instrumentals, regardless of how good each individual tune is, does need light and shade, depth and colour and several changes of gear to maintain the attention of most listeners, however. This CD is one that meets those challenges even, at times, within a single tune.

The excellent Ghostrider, for example, starts off with a very gentle and soothing melody but gradually gets more and more frenetic, drawing the listener in until finally, at the very, very end, the tune draws to a close with all the soothing gentleness with which it began.

A fresh and vibrant take on traditional Celtic music, a strong collection of original tunes and some inspired interplay between the three musicians, NUA are likely to continue cementing their reputation on the folk scene and no doubt pick up a few more awards with this, their second album.