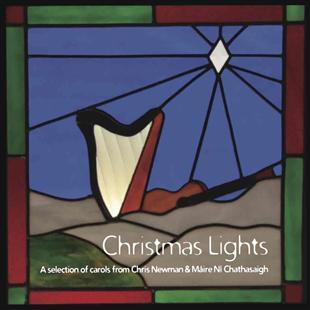 Christmas Lights is a seasonal release from well-regarded duo Chris Newman & Máire Ní Chathasaigh. The album is based on instrumentals and built upon some fine playing of the acoustic guitar and harp. All the tracks are carols from a range of nations and many of the traditional Christmas favourites are featured.

At its best, Christmas Lights provides subtle and understated instrumental versions of Christmas classics, some in a medieval style (for example, Coventry Carol) with others spinning out into other genres, such as the rather jazzy interpretation of Ding Dong Merrily on High. The album provides good mood music for the season although a few of the tracks don’t quite stand out from the crowd.

This is an album that will work well providing a musical background to Christmas celebrations rather than demanding to be the centre of attention.