The Bailey Sisters - After Silence, Music 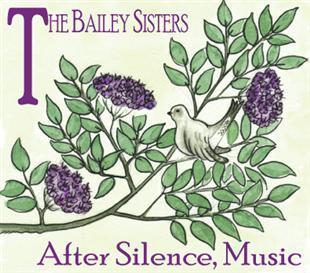 Clean and bright harmonies kick off After Silence, Music, the new CD from Alyson Rainey, Karen Dyson and Shelley Rainey - aka the Bailey Sisters.

The trio are clearly comfortable performing together, and their edifying harmonies provide a strong backbone to the album. You might
expect a degree of repetition but the group keep things varied - arrangements of trad standard My Son John and Summerisle (originally
from the soundtrack to The Wicker Man) show off neat interplay of the singers’ voices.

Solo performances and accompaniments on guitar, fiddle and recorder further add to the mix. Particular highlights are the sensitively sung Rare’s Hill, imaginative original song Bells of Tallinn, inspired by a
trip to the Estonian capital, the sad No My Love, Not I and an exultant rendition of The Cuckoo.

With an orchestral interlude from The Telemann Canon emphasising the group’s classical heritage, After Silence, Music represents a charming mix of original, early and traditional music.

Full disclosure: Shelley Rainey, one of the Bailey Sisters, is an editor at Bright Young Folk. Mark was chosen to review this CD as he is one of the few people in the folk scene that has not met Shelley.