Sam Sweeney’s Fiddle - Made in the Great War

Posted by Paul Rawcliffe on 01 September 2014

Sam Sweeney is well renowned as a musician for his work with Bellowhead, Hannah James, Kerfuffle and a new group called Leveret.

His latest tour is extra special as it aligns with the 100 year anniversary of the First World War. Sam is getting involved with this anniversary by exploring the history of his fiddle, which he has discovered was first crafted during this time by a man called Richard Howard.

His tour involves not only music, but stories and special guests such as storyteller Hugh Lupton who will be narrating the stories focusing on the history of his fiddle and its creator. We asked Sam all about it: 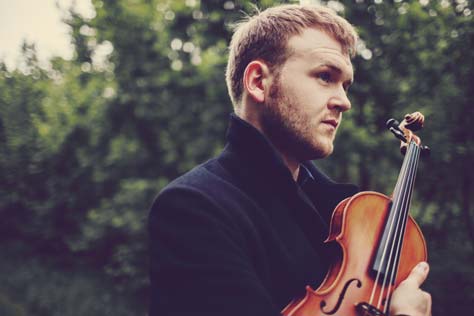 Your new tour has a very fitting theme what with it being the anniversary of the Great War. What first sparked the idea of exploring the history of your fiddle as a show and has it been planned for a long time?

I bought the fiddle six years ago and the discrepancy between the date inside and the condition of the instrument set me off exploring the history of the fiddle straight away. We had most of the story for years but it was only about eighteen months ago that the idea of making a show occurred to me.

I was fortunate enough to be awarded some funding by EFDSS which was designed to get me to do something outside of my comfort zone and away from day to day gigging. Having seen Hugh Lupton perform with Chris Wood a few times, I knew that he was the man I’d like to bring my story to life. I rang him up and he jumped at the chance.

A few months later, I was gigging with Sam Carter in the Purcell Room in London and Terry O’Brien, Sam’s agent, thought the story was so good that it would make a brilliant show. So she inspired me to apply for more funding from Arts Council England and we were successful! So it’s all been planned and in process for a year and a half, although I’ve been sitting on the story for about six!

As you discovered more, were there particular moments when you were surprised or even overwhelmed that an instrument could have such an interesting backstory?

Absolutely! The whole thing has been staggering really. To begin with, the research was quite easy. We found a number of Richard Howards living in or near Leeds in the 1911 census. But only one matched the signature inside the violin, so we knew we had the right bloke. Finding out when he was born, when he died, who he married etc. was quite simple too. It was all hugely interesting but finding out that he had gone off to Flanders in 1916, leaving the unfinished violin in Leeds, was when the story became truly remarkable for me.

It was at that point that I realised what an amazing object I was touring up and down the country. Since putting the show together, we are in touch with some of Richard’s living relatives too, which has proved very emotional for them.

They knew very little about Richard, and nothing about his luthier skills, so to find out his story was fascinating for them. The fact that there’s now a show about their relative about to tour the UK is a bit mental for them I think! Some of them are coming to see the show, including Mary (his granddaughter). I cannot wait to meet them. 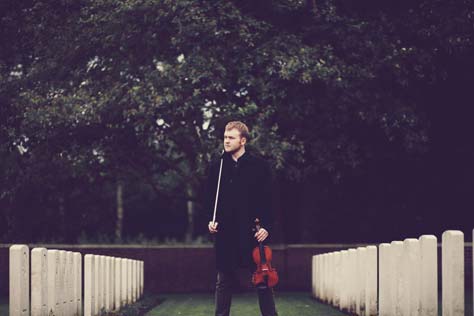 You talked in a recent BBC piece about going and playing this fiddle at Richard’s grave, can you tell us a bit about that?

It was a great experience. Going to Belgium to visit the place where Richard fought seemed like an essential part of creating the show. After visiting Hill 60, seeing the battlefields that Richard would have seen, and playing the violin at Richard’s grave, suddenly the whole thing made sense. The story seemed to have come full circle and the poignancy of everything we had done to that point really hit home.

There was I, stood at Richard’s gravestone, playing the violin that he never got to finish. It was the most moving thing I’ve ever done. When Richard went to war, it’s quite possible he thought he’d never come back to finish my violin, and there I was taking it to him. We took Elly Lucas to take photographs and James Lockey to film the whole thing, and those who come to see the show will see some of the amazing footage we took that day!

As well as telling the stories of this fiddle, your tour will of course feature music. Was it difficult to select the music to accompany this unique project?

Not at all. In fact it was very easy! There was so much music available to us. Richard Howard worked in Music Halls in Leeds, so we had whole libraries of Music Hall repertoire to look at. The regimental music of the British Army was also a wealth of inspiration. In the end, The Wellesley (which is the regimental march of The Duke Of Wellington’s West Riding Regiment) formed a huge part of the musical material for the show. I think the theme recurs about five times in the show.

We also really wanted to include some traditional music. For me, the musical highlight of the whole show is The Ballad Of Richard Howard. Hugh Lupton rewrote the old ballad of the Cruel Sister to be set in the trenches. In the traditional ballad, a sister is murdered by the other sister and a fiddle is made of her body and the fiddle sings of her death.

Hugh has rewritten this ballad, with music by me and Rob Harbron, to be set in the trenches of Flanders. A fiddle is made from the body of a dead soldier, and the instrument sings of the sorrows of war. It’s incredible!

Was there anything you uncovered that you weren’t able to fit into the show?

Erm... difficult question! There were a couple of things that I felt weren’t really appropriate to include. But everything interesting that we found out has made it into the show, except Woodbine Willy! There was an army chaplain known as Woodbine Willy who used to give cigarettes to soldiers in the trenches. He would have been around when Richard was in Messines, and he would have been cool to include in the story! But alas, not this time.

Are there any plans to record the show or take the project further after the tour?

We have recorded an album of the show so people can take the story home with them. It will be released on RootBeat Records on September 1st and will be available on the tour, as well as the usual places.

Some people have asked if we’re doing a DVD of the show. The answer to that is no. At least not yet... As for taking it further after this month, never say never.

There are five years of centenary commemorations and there are some areas of the country we’re not covering on this tour. All I can think about at the moment is going into hibernation after this tour is finished, but watch this space. We may end up doing it again at some point!

Tour dates for Sam Sweeney’s Made in the Great War 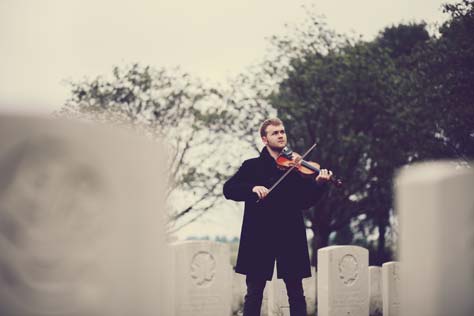 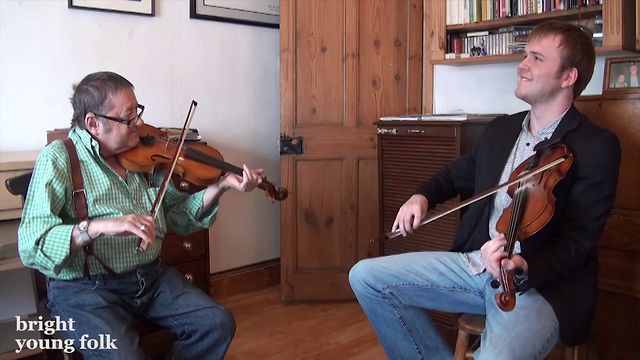 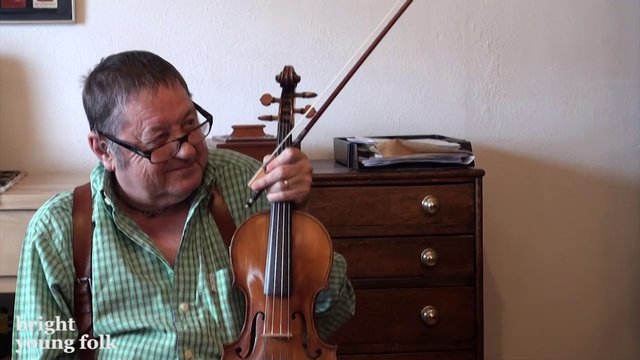