Posted by Christopher Friedenthal on 19 June 2009 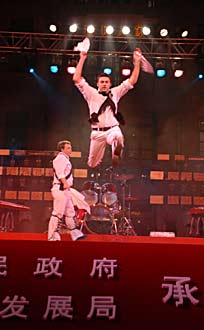 This is part one of our extensive two-part interview with Damien Barber about the Demon Barbers’ recent trip to The Yangtse River Arts Festival in Wuhan, China. Part two will be published on 20 June 2009 and covers cultural misunderstandings and future plans.

How did the trip come about?

In February we received an email from Brian Tasker, squire of the Morris Ring, saying that they’d been approached by the Yangtse River Spring Arts Festival asking if they were interested in sending a group of dancers. Li Liu (Lily), one of the festival organisers, saw some Morris at Wimborne Folk Festival last year and loved it. She wrote to the government in Wuhan asking if they would be interested in a group of traditional English dancers coming to the festival.

Originally they invited up to 40 dancers but the catch was that although everything was paid for in China the artists would have to cover their own air fares and visas fees. It was an amazing opportunity but with only 2 months notice none of us could really afford it so we had to turn it down. Then said that they would pay the flights for a smaller group so we couldn’t resist!

When so many people in England are unaware of their own heritage how do you find that foreign audiences react to the English song and dance tradition?

I think this is a mistake people involved in traditional folk arts often make - assuming that the majority of people from other countries know about, understand and respect their own traditions. The majority of people around the world are too busy living to be concerned with whether something is traditional or not, this is a luxury that the majority can’t afford. I’ve read many stories of the demise and sometimes deliberate destruction of traditional culture in other countries and also the fight to protect and revive them. At the same time I suspect the majority of English people will have come across Morris or country dance at some point in their lives. The idea they are unaware of their own heritage I believe is wrong, that they don’t always understand or respect it is another issue altogether.

One of the oddest things on this trip was hearing ’Auld Lang Syne’ played on traditional bronze bells in a temple and also on a CD at the closing ceremony of the Arts Festival (sung in English and Chinese). This song has now been assimilated into Chinese culture as a traditional farewell song and throws up all sorts of questions surrounding traditional culture.

The acts at the festival seemed to be a healthy fusion of traditional, classical and contemporary. What surprised us mostly was that all the music was canned, even the children’s orchestra, and I think the fact that we played live helped us enormously.

There were around 300 VIP seats in front of the stage and then what seemed like half of Wuhan gathered around the perimeter pushing back into the car parks as far as you could see. I doubt many of the people outside the perimeter knew that our performance was based on English traditions and I doubt it would have made any difference if they did. What matters to us is we gave them 100% and they gave it back. 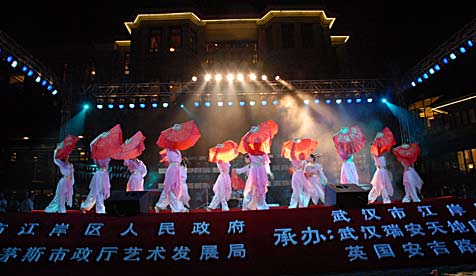 Did you have to change your show at all?

By the time we got round to the festival we were chomping at the bit to perform our usual repertoire. There was to be 4 Chinese acts and us so we only had 4 numbers to get our message across. The organisers wanted a bit of everything and so we gave them a band and clogs number, clog and drums, Morris and Rapper. They insisted on putting the band and clogs (our finisher) on first because they were worried that some of the VIPs would only stay for the opening ceremony and then head off. This meant that we had to have a second finisher and so we worked a link from Morris back into a band and clog set. As it turned out all the VIPs stayed for the whole show and even joined in a mass photo shoot at the end.

Did you have any ethical reservations about touring China?

It’s one of the first things I thought of - Human rights, Tiananmen Square, Tibet, the one child policy. There’s no doubt that there have been/are humans rights violations in China but to what extent I have no idea. There is also no doubt that western propaganda is negatively biased towards non-western states (or any country that doesn’t toe the line or operate on our terms) so the closest we’re going to know the truth is by listening to organisations like Amnesty International.
During my teens I was a reasonably active campaigner for animal and human rights, anti-capitalist and anti-nuclear organisations and I hoped I was well read on world politics. I believed many of the alternative stories of the atrocities that the UK and USA sponsored governments were committing around the world, many of which that have now been proved right. China has a reputation for burying its ’mistakes’ and I’ve read that the Tiananmen Square incident has all but been eradicated from the Chinese history books. Is it any different in the west? When was the last time a child was taught about Bloody Sunday in a comprehensive school in England or Margaret Thatcher’s support for the Chilean dictatorship that caused 1000s of its opponents to ’disappear’.

Then there’s the question of our support for the USA governments that have been involved in some of the worst human rights abuses this century - Vietnam, Nicaragua, Granada, Korea, Cuba, Iraq, Afghanistan, Guantanamo Bay - the list goes on. There are abuses going on all over the world and if we are to avoid playing music in countries that are complicit in them then we should probably start looking closer to home too. Come to think of it, where is an ethically safe country to tour? Switzerland? I’ve toured the USA a number of times on my own over the years and have never once been asked whether I had ethical reservations about playing there. Funnily enough though, I had to search my soul a lot deeper than I did when we went to China.