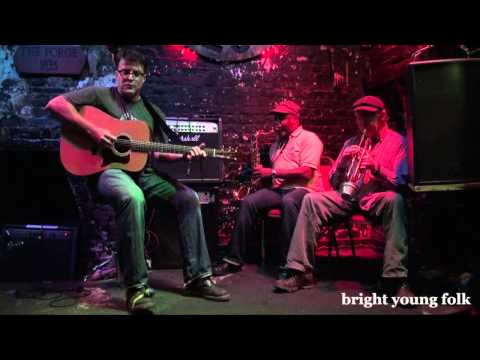 Ian King plays By George and sections of Adieu to Old England from his album Panic Grass and Fever Few. Playing with Ian are Richard Doswell on sax and David Fullwood on trumpet.

Ian talks to Bright Young Folk about finding inspiration on his travels, his Panic Grass and Fever Few album and the beginnings of a new collaboration with Anùna’s John McGlynn.

Says Ian of his activities since the interview, "Regarding the collaboration with John McGlynn, we spent a wonderful week at the Tyrone Guthrie Center in County Monaghan in January where we forged the beginnings of our joint venture. This will be a combination of trad Irish and English mixed with original material, although exactly what balance is still unclear.

"We take our wee duo out on the road next weekend opening for the Gothenburg film festival. Then we need to concrete the recordings and arrangements somewhat.

"Meantime, I have been working on another Ian King album that will probably be somewhat trimmed down from the On-U-Sound production."